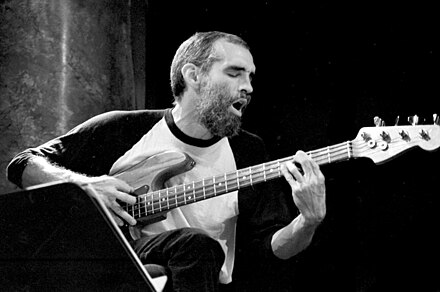 One of the first upright players who switched to electric bass.

His 5-string guitars are in the relatively peculiar EADGC tuning (i.e. a high C instead of a low B), to ease his chordal work.

He’s been using pick since the very first moment he switched from upright, due to tonal preference.

Swallow’s tone differs between the years, but one thing is constant - he relies a lot on the highs to achieve a gentle and melodic sound, which cuts through the mix. Sometimes he hits the string harder, which (expectedly) slightly distorts the tone.